This rosemary lemon cream soda has been kicked up a notch with the addition of rosemary simple syrup, sparkling water, and a dash of cream. The result is an herby, fizzy, tangy, yet creamy drink that is perfect for the upcoming summer weather.

Do you remember when I made my rosemary chocolate bark and said rosemary in sweet applications was my new favorite thing? Well, I have made this drink a few times since then, and decided that I really want to share it with you! I was debating on the title… Rosemary lemon cream soda, or sparkling rosemary lemonade. Which one do you think it better? Oh, well, it’s actually too late, because I chose the first one. Hopefully that’s the one you chose?

When you think of cream soda, you probably think of that tan-ish soda that kind of tastes creamy-ish and is really REALLY sweet. What I’m talking about here is more the Italian cream soda, where there’s… actual cream in it. Way better, in my opinion. And still sweet, but not sickeningly so.

This rosemary lemon drink comes together really easily, with just a liiiiiittle bit of time spent making a rosemary simple syrup. And what I mean by time spent making it, is that actually, you don’t really have to do anything. You bring some sugar and water to a simmer, throw the rosemary in there, let it simmer for a minute, and then take it off the heat and let the rosemary steep for a half hour. Easy peasy. And then you have a wonderful herby sweet syrup that I am LOVING right now.

I’m thinking this syrup would also be good brushed between the layers of a lemon cake. Or maybe a rosemary caramel? I need to start brainstorming. Tonight I’ll put some in my chamomile tea and see how that tastes!

So, kick up your lemonade game, and add some rosemary to it. It’ll really add some dimension, and it’s SO refreshing. Also how cute are these glasses? Why not get some of your own? This lemonade has been kicked up a notch with the addition of rosemary simple syrup, sparkling water, and a dash of cream. The result is an herby, fizzy, tangy, yet creamy drink that is perfect for the upcoming summer weather.
5 from 1 vote
Print Recipe Pin Recipe
Prep Time 5 mins
Cook Time 30 mins
Total Time 35 mins
Course Dessert, Drinks
Cuisine eclectic, fusion
Servings 4 people
Calories 303 kcal 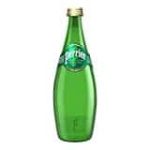