To go along with yesterday’s karaage chicken, here is another bento classic. It’s a simple egg roll, called the tamagoyaki. Loose translation: cooked egg. Basically. BUT before you read any further, I have you tell you… you need a special pan to make this. I have this (affiliate) one. Is it worth it to buy a pan specifically to make tamagoyaki? I guess it goes to show how popular of an egg dish this is in Japan, because basically every household has one of these. But back to the question. Is it worth it for YOU? Eh, probably not. But before you quit this dish, let me give you an alternative. This recipe- scrambled. Or omelette style. Whatever you want. I mean, the flavor is the same, so if you want to eat Japanese tasting egg (really yummy, obviously), you can just scramble it! Secret: I sometimes do that, because rolling the egg up is a pain and I’m actually pretty bad at it. I just don’t have that stereotypical Asian dexterity. I’m good at math though!

Right, so now that we have the pan problem out of the way, this recipe does require dashi stock. Dashi stock is a basic Japanese stock made from kelp, bonito, or both. You can buy it in granule form and mix it with water. It’s really easy- just follow the instructions on the container. You can get dashi granules at any Asian store. Actually, you might even be able to buy it at a regular grocery store in the Asian section. No promises though. Here where I live, the Asian section of grocery stores are laughably small.

Finally, how do you like that pretty cloth I used in the pictures? Isn’t it cool? It’s called a furoshiki, which is a cloth that is used to wrap things (like bento!). In this case, I guess I’m implying that I’m just gonna wrap those dishes up and take them to lunch or something. But the reason I bring up the furoshiki is, this is a special furoshiki. It’s designed by some guy and it’s really pretty and my husband made me trek across Tokyo and buy it for him when I visited Japan (and left him behind because he had to work). Basically what I’m saying is that after all that, I dug it out of a box it’s been sitting in for over two years, and finally used it for something! Isn’t that funny that the things we just HAVE to have end up not being thrown into a box and forgotten about? I’m glad I could put it to use because, really, it’s a beautiful piece of cloth.

Anyways, make these eggs! They are super good!

NOTE: Just to let you know, this egg has some sugar in it. The sweetness might throw you off a bit, but don’t let it weird you out. Instead, realize how it just… works.

Note 2: If you do not have a tamagoyaki pan, this recipe can also be eaten scrambled! 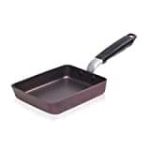