These adorable cupcake toppers are easy to put together, and taste delicious. Santa cupcakes are sure to be a hit at any Christmas party!

Christmas is just around the corner, and I wanted to get one more recipe/idea for you guys. This isn’t much of a recipe, since it’s just the top of the cupcake, but the star is the Santa, and it doesn’t really matter which cupcake you use for the base! I used these same Santas on a strawberry mousse cake last year, and they are just as irresistible as Santa cupcakes!

I’m pretty careful with my food dye usage, and I avoid it when at all possible. I love using fruit for its amazing colors! Plus fruit tastes better than just piling on frosting, in my opinion.

Speaking of frosting, I used whipped cream because I like it better than frosting. In this situation, I think it also makes a nicer shape. That being said, if you have a light frosting that pipes well, you MAY be able to use it instead.

The way I got my whipped cream to hold its shape is by stabilizing it. That just means to add some gelatin

(instructions in the recipe) to thicken it up a bit. It doesn’t affect taste, and makes it SO much easier to work with! I used the Wilton 2A

and Wilton 3 decorating tips, and thought they were the perfect size.

The “snow” is just grated white chocolate. Or shaved. Whatever you want to call it. To do this, it is important to use a bar of chocolate instead of chips. I just shaved all of mine into a bowl and then sprinkled it over the top of the cream.

or these little bit fancy ones

I hope you give these Santa cupcakes a try for your next Christmas party or to eat on Christmas day! Make sure to check out my hedgehog cookies for another cute and festive treat!

And check out the video below so you can see exactly how I made these! These adorable cupcake toppers are easy to put together, and taste delicious. Santa cupcakes are sure to be a hit at any Christmas party!
No ratings yet
Print Recipe Pin Recipe
Prep Time 20 mins
Total Time 20 mins
Course Dessert
Cuisine American
Servings 12 people
Calories 268 kcal 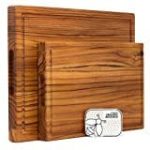 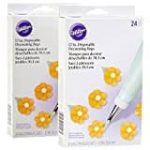 I used 12 cupcakes because I baked a dozen, but I had left over cream. You should be able to make at least 18 cupcakes with the amount of cream.  Calorie count is based on an average vanilla cupcake having around 200 calories.