This non-alcoholic apple jelly “beer” is made with just a few simple ingredients and looks JUST. LIKE. BEER. It is easy, fun, and quick to make.

Does this picture confuse you? Like, how is that spoon just hanging out in that beer? Oh, maybe it’s a photo of the spoon falling into the beer and they snapped the picture at the perfect moment?! Or… maybe you read the title and you already know that it’s just apple jelly that really looks like beer.

I was trying to think of what to post for St. Patrick’s Day. I feel like I should have at least one recipe for each holiday, but St. Patrick’s Day really stumped me. I don’t drink alcohol, and I don’t really like using too much food coloring. So, basically every recipe is out, unless I make a salad. That’s green!

I was explaining my predicament to a friend of mine, who said, “well… can you maybe do something that’s like, not actually beer? Like, fake beer? Haha.” And I thought, um… yeah … THEN I had an epiphany. Apple jelly “beer”! Thanks friend, for the odd suggestion that was actually a great idea!

A couple years ago, my mom was going to pull a prank on her co-worker. I don’t know the exact details, but it revolved around apple jelly that looked just like beer. Apparently she had seen it floating around some Japanese recipe sites.

I quickly googled it and found several recipes. It couldn’t be easier! Apple juice, gelatin, and some sugar if you want to sweeten it up a bit are all you need for apple jelly “beer”.

You want to make sure to use one of those “from concentrate” cheap apple juices that are clear, found in the non-refrigerated juice aisle. If you use the cloudy fresh squeezed stuff, it’ll taste great but it obviously would not get the beer look we are going for.

So what will you make this apple jelly “beer”? A prank? Maybe you are going to give it to your kids on St. Patrick’s Day while you drink your Guinness? I’m sure there are mixed opinions on giving your kid something that looks like beer, but hey, I gave it to my four year old and she’s doing alright.

Check out the video below for a quick tutorial, and take a look at some of my other fun jelly and gelatin recipes! 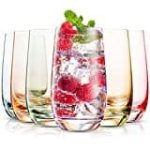